I'm Ready to Pack It In

So, I've come to several conclusions lately.  Here they are, in no particular order:

Holy hell, if I pack one more box, wrap one more piece of crystal in paper or nestle one more tchochke into a Styrofoam peanut laden box, I'm gonna lay on the floor and pitch a fit.  My knee is killing me, my back is ready to go out at any second and my right shoulder is on fire.

So, here is my living room and master bedroom right now.  For an everything-has-its-place kind of gal like me, this is torture.  The chaos and disorder is more than a little overwhelming. 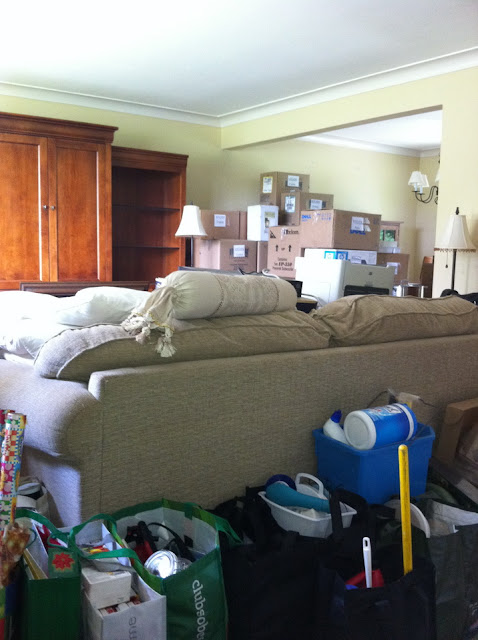 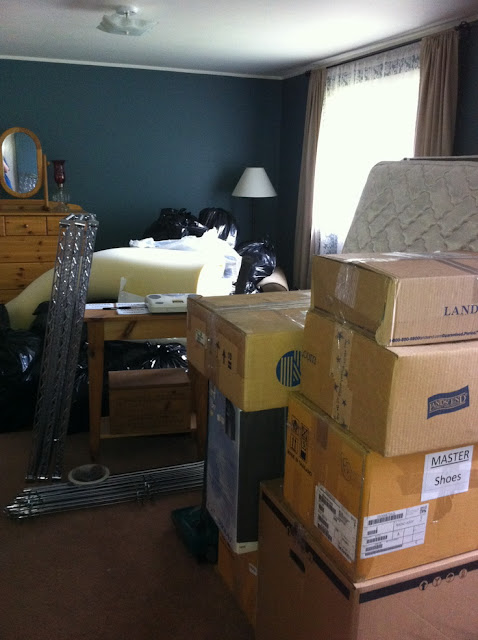 Evolution of a Sewing Room - Part 5

Yesterday, the cabinet makers were at the house installing the cabinetry and putting on the toe kicks.  We now have the base and upper boxes in the kitchen, butler's pantry, laundry room, all the baths and my sewing room.  The doors and drawers will be added as soon as the counter tops are in place.

Boy, oh boy, does this make me feel like this house is striding into the finish line (as it should, we only have one week until we move in).  I am positively giddy with excitement at this point! 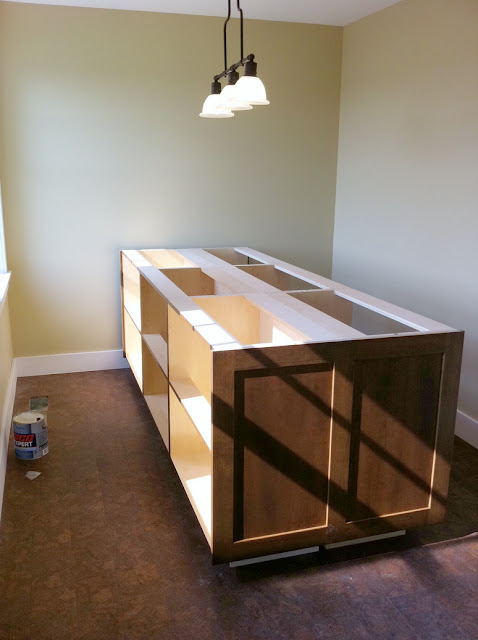 In the picture, you can see my sewing room cabinet in place.  I designed this piece to do double duty as a cutting table and as a pattern/notion cabinet.  On one side there are six deep drawers.  On the other side there are three deep drawers and six shallow drawers.  I should be able to house my entire envelope pattern collection in the deep drawers and most of my notions (zippers, elastic, buttons, etc.) in the shallow drawers.  I am dying to fill up this bad boy with delicious sewing goodness.  My next moment of joy will arrive when my shelves are in place and I can go nuts loading the textiles into the fabric closet.
Posted by Shannon at 7/20/2011 03:21:00 pm 18 folks say 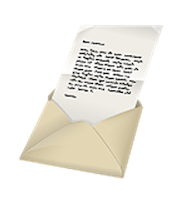 At the end of the school year, I was chatting with two of my female grade 12 students.  They were relieved, yet sad, about high school coming to an end.  They were also excited, yet nervous, about university starting in the fall.  They were mainly anxious to get on with the next phase in their lives.

It struck me that we often try to zoom through our lives, yearning for the next big moment or experience.  Sometimes, we forget to enjoy the present, to savour the moment.  Conversely, we often don't think ahead enough.  You only have to look at how many people are in a financial crisis because they didn't plan ahead.  I guess we all need a balance of "living in the moment" and "preparing for the future."

So, I suggested that they write themselves a letter containing how they felt right that instant and what they wanted for themselves in the next few years.  The letter should include what is important to them, who is special in the their lives and where they look for inspiration.  It would also lay out the path they intend to follow to reach their goals.

The young ladies lit up at the suggestion and began to write for the remainder of the class.  I hope they finished those letters to themselves.  I hope they keep the letters in a safe place, so they can reflect on their thoughts over the next few years.  Most of all, I hope they mature into the fine, strong women that I know are inside of them.

I wish I would have written myself a similar note.  Although I can't turn back time to when I was 17 and write my future self a letter, I can reverse the process.  I can write down the few things I wish I had known when I was a teenager about to embark on the road to adulthood.

Dear Shannon,
Okay kid, listen up!  Take off the Walkman, turn down the Depeche Mode and pay attention.  There are two things that you can do today to make yourself happier in the future:
1.  Start contributing to a RRSP now.  Don't wait until you're in your late 20s - do it now.  Even a small amount of money contributed each month now, will add up to big bucks in the coming years.  So, stop buying crap and wasting your money.  Instead, take a portion of that money and invest in the future.
2.  Wear sunscreen every single day.  I know you mainly avoid the sun now, but sunscreen is so important.  You will be pretty happy with the condition of your skin at 41, but a daily dose of sunscreen might stave off the tiny wrinkles you'll see starting around your eyes in your early 40s.
So, did you get all that?  Good luck and I'll see you soon.
Love,
Shannon
P.S.  Stay away from John during first year of university - he's a jerk and he'll end up breaking your heart.
So, what would you say to your younger self?
Posted by Shannon at 7/17/2011 01:08:00 pm 10 folks say

Evolution of a Sewing Room - Part 4

The baseboards and the trim around the windows and doors were installed today.  I love how it finishes everything off so nicely. 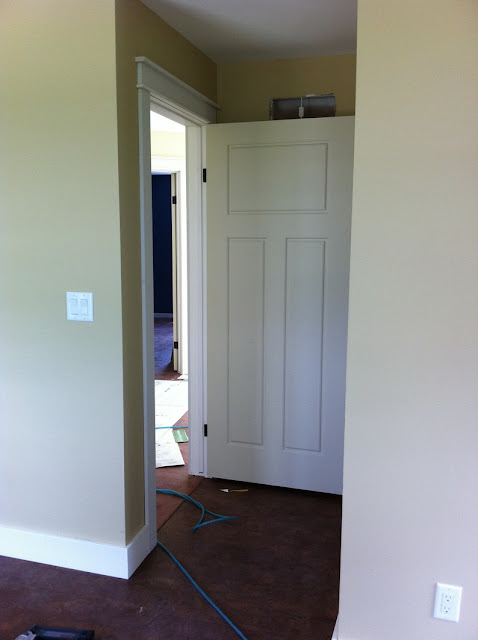 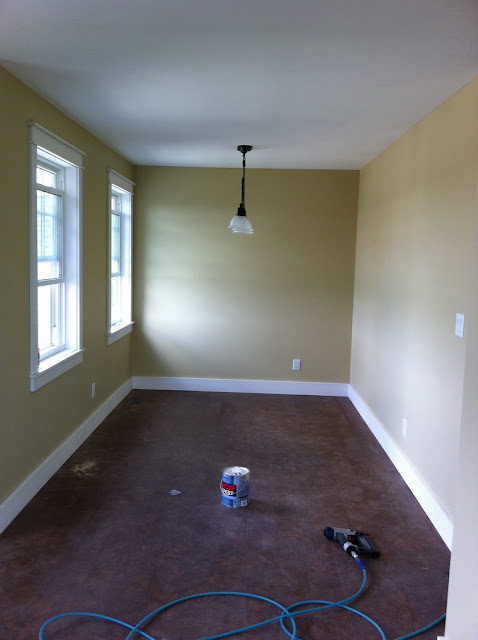 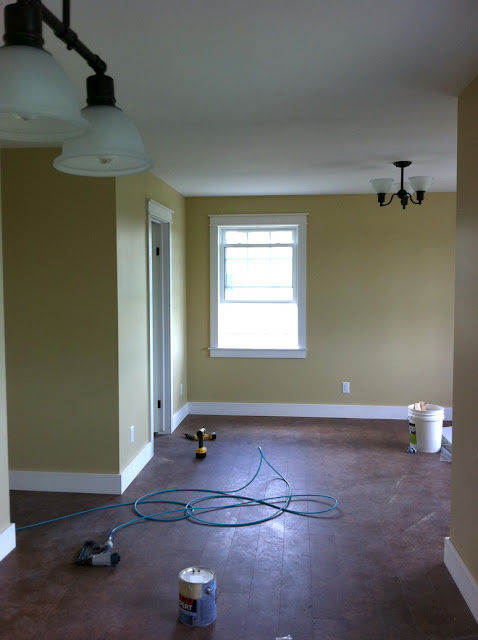 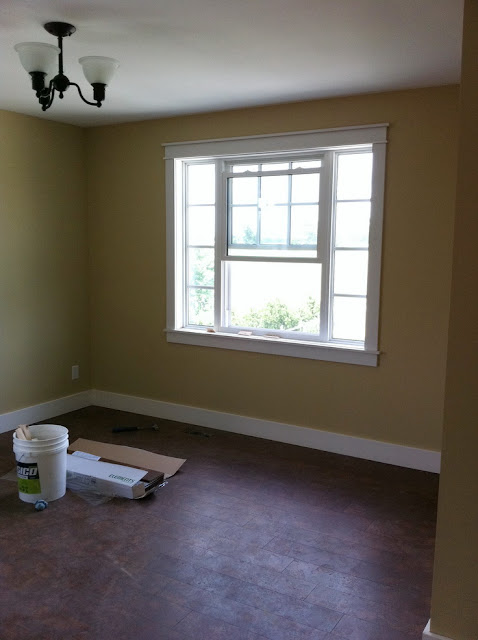 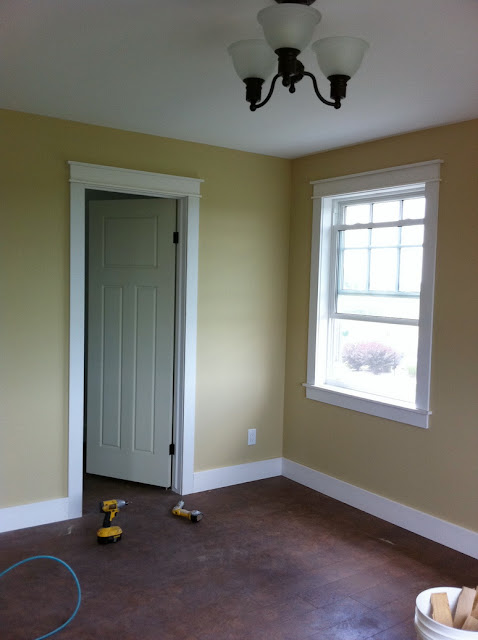 In the comments to a previous post, I was asked about the colour of paint used in the this room.  The walls are Pale Wheat from Behr's Premium Plus Ultra line. The trim will be Polar Bear from Behr's Premium Plus line (however, what you are seeing right now in these pics is just primed MDF).  Below are the cropped screen shots of the two colours I snagged off of Behr's website (which is fun to play with BTW). 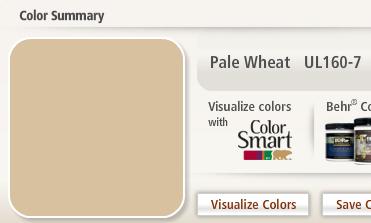 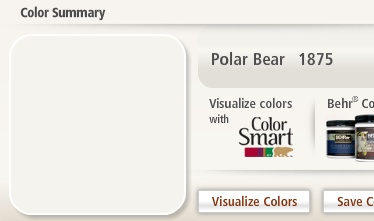 Pale Wheat was an obvious choice for me.  It is so pretty - it reminds me of cashmere.  I wanted something neutral on the walls so that it wouldn't compete with my fabric.  I like a quiet colour in an area where I create - I find a soothing, pale colour allows me to work with my fabrics without colour overload from the room.  I have richer shades in other rooms in the house (I'll have to take you all on a virtual tour once we are settled in), so those rooms satisfy my need for saturated colour and I am content to keep it subtle in the sewing studio.
Posted by Shannon at 7/14/2011 01:23:00 pm 13 folks say

Evolution of a Sewing Room - Part 3

Let there be light!

The electrician installed the lighting in my sewing room yesterday.  When choosing the fixtures, I wanted a good balance between aesthetics and practicality.  There is nothing more frustrating than trying to unpick thread in a dimly lit room.  Likewise, tracing a pattern without enough ambient light is annoying too.  But, I wanted something pretty, not just utilitarian.

In the centre of the main portion of the room (where my machines will be located), there is a three light semi-flushmount fixture from Progress Lighting's Madison collection, in the antique bronze finish. 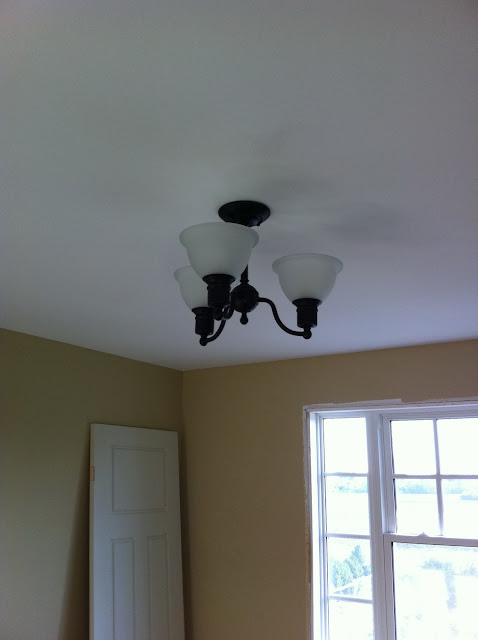 The other fixture, a three light chandelier which will hang over my cutting table, is from the same collection. 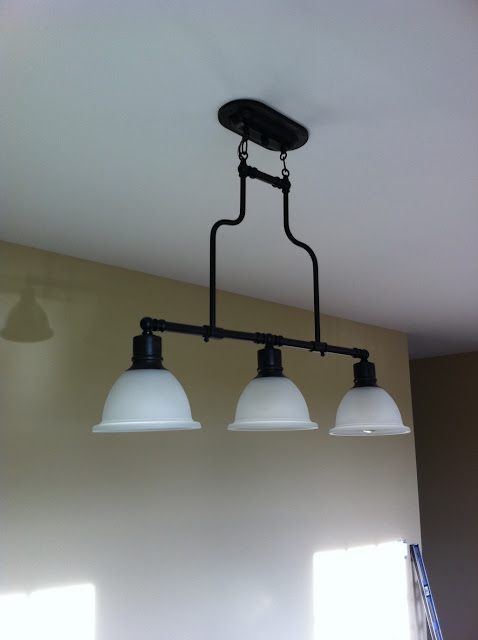 Both lights were ordered from Home Depot.  I have to say I was wary of ordering lighting online from Home Depot (since I couldn't see the product before hand), but these fixtures are quite nice at a decent price.

Don't say I didn't try to warn you.  I thought I had given you ample time to prepare.  To train your family in combat techniques.  To squirrel away supplies.  To fortify your home.  But you didn't listen, did you?  And now, it's too late. 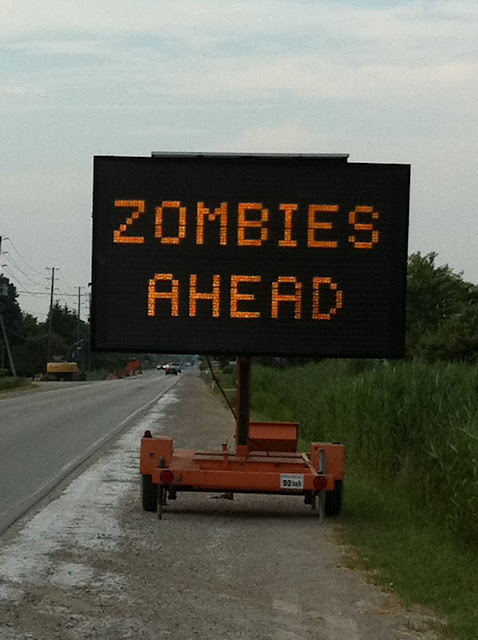 Oh, and don't expect to come knocking on my door, looking for shelter.  If I have learned anything from watching movies, it's this: you never allow extra people into your shelter.  It's a guarantee that some dumb ass will have a zombie bite that they don't tell you about.  And then, 30 minutes later, you're the main course at a brain buffet.

P.S.  Hubby and I saw this sign on the roadside during our drive home from the new house.  The town was using it to inform commuters that some construction is taking place this week.  However, some smartie pants switched it to this instead.  It was blinking out the above warning all weekend long.  Hilarious!
Posted by Shannon at 7/11/2011 06:53:00 am 8 folks say

Evolution of a Sewing Room - Part 2 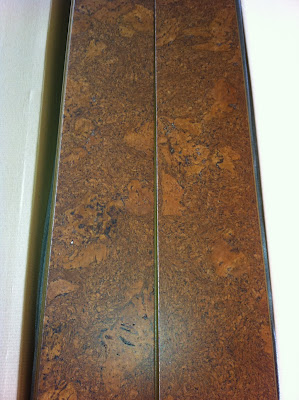 In my last post, I showed you the progress on my sewing room.  Since then, the flooring has been installed.

I chose to go with cork flooring that coordinates with the red oak hardwood found throughout the rest of the second floor.  I have a few knee and back issues that crop up if I stand on a hard floor for too long.  The cork is a remedy to this potential pain.

Cork is a so much nicer to stand on for long periods rather than tile or hardwood - it cushions achy bones and muscles like a dream.  And since I didn't want carpeting in my sewing room (trying to vacuum stray threads out of carpeting is a royal PITA), cork was the obvious choice.  The bonus is that it is very aesthetically pleasing as well.

The cork comes in strips that click together very easily (similar to many laminate floorings on the market).  It was such a quick installation that the builder was able to complete my entire sewing room, including the fabric closet, in less than a day.  Talk about instant gratification.

Below are pictures of the installed floor.  Unfortunately, not only is the floor dirty from the installation, but the lighting was not on my side when I snapped the pics.  However, it still gives you an idea of how the cork looks on the floor.  Now all the room needs is trim, a door and the proper light fixtures. 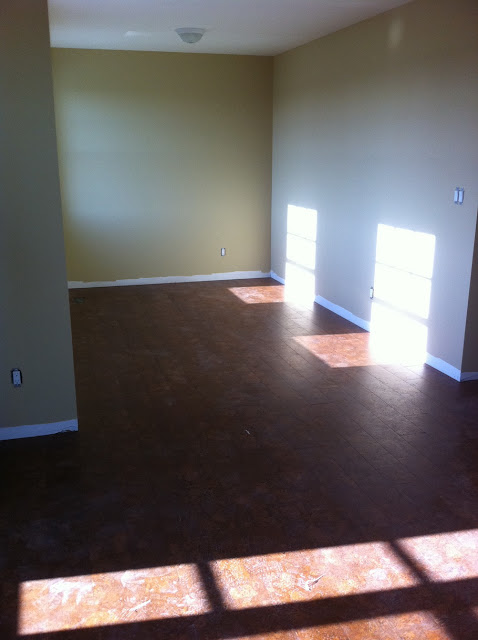 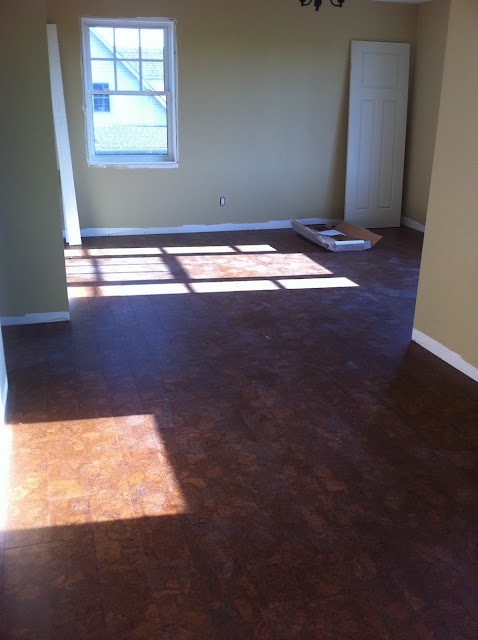 Much has been done throughout the rest of the house (inside and out) since we last spoke.  Below is a picture of the house front as of yesterday.  The outside of the actual house body now only needs a tiny bit of siding, a few lights, the front door and eaves troughs.  The septic system and geothermal heating/cooling is supposed to be installed during this coming week.  Then the land can be filled in around the house, graded and seeded. 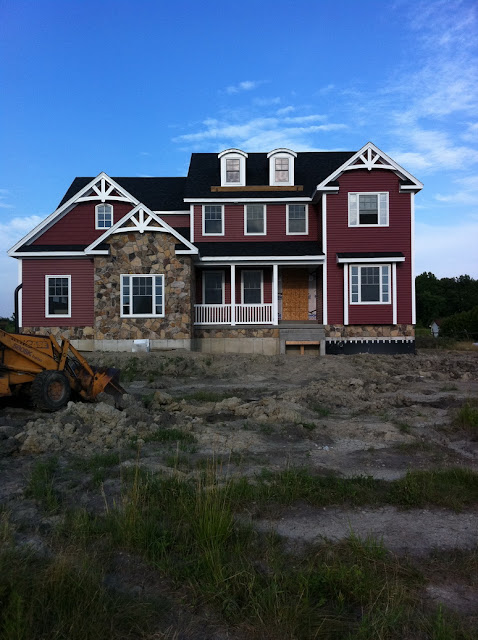