Quite a while ago, I had mentioned that my husband & I own a 4 acre property.  We purchased it five years ago with the intention of building a house.  Well, life intervened and we didn't build immediately.  Translation: Hubby works for Chrysler Canada and although they did not go through bankruptcy like the American counterpart, we were still hesitant to commit to house building during strange economic times.  We are now at a point financially that even if he was to lose his job (which is an extremely remote possibility now), we would still be financially sound as new home owners. 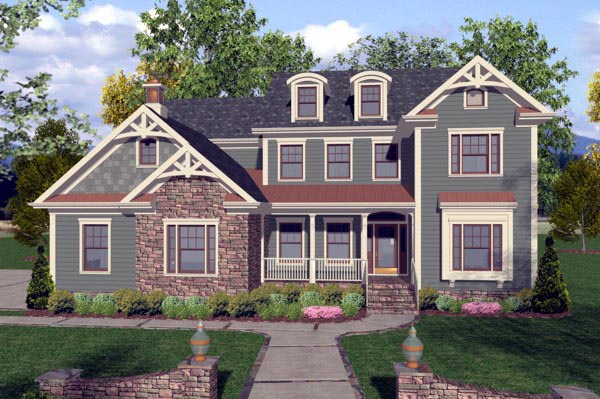 So, we have picked a house plan (that's the exterior over on the left - I loves me some Craftsman styling!), found a builder and are now in the process of putting it all into action.  The builder says that we should be walking through the front door by August 1st next summer.

Needless to say, I have been busy due to all the house design and planning.  Not to mention that I have a sweet pup with which to spend time and a job that is more necessary than ever if I really do want all those professional caliber appliances in the new kitchen.

I still have many garments to share with you all, but with time at a premium, I am finding it difficult to squeeze out the moments needed to photograph and blog.  So, please bear with me, I'll get it in gear soon.
Posted by Shannon at 9/20/2010 04:46:00 pm 29 folks say

Lately, I have run across a number of woman who care too much about what other people think of them.  Worse still, they are allowing other people to dictate how they feel about themselves.  I think it came to a head for me recently on a sewing discussion board.  A poster asked for opinions on a fall fashion trend.  When many of the responses were dissenting (most posters were respectful and many were quite funny), it was suggested that this negative view of the trend would discourage many woman.  They would feel too shy to indicate that they were fans of the trend and/or they would be too intimidated to try out the trend for themselves.  After this was pointed out, I felt bad (I was one of the dissenters*) and I posted an apology just in case I had made anyone feel bad.

Well, I have been mulling this over in my head for the last few days and I have to say, I'm feeling less charitable now.  I'm actually kind of annoyed.  Why do women do this? Why do they give a flying fig about what other people think of them?  Why are women so bloody sensitive?  And why do women let others dictate how they feel about themselves?

As much as I hate the lack of dressing in North American society these days, I fully endorse a woman choosing to dress as she pleases.  I'd much rather see Ms. Mutton-Dressed-As-Lamb out in the world feeling foxy than the well-dressed clothes horse behaving like a mouse.  There is something about an aura of confidence that makes anyone more attractive, regardless of their garb.

For instance, I think Betsey Johnson dresses like a complete weirdo half the time, but there is no denying that she unapologetically owns her look.  Although, I cannot imagine ever dressing like her, I am drawn to her image - she appears happy, content and above all, comfortable in her own skin.  I'm guessing that she never lets any one's opinion impact her confidence or self-esteem.  In every photo I see of Betsey Johnson, her greatest fashion accessory is her self-assurance.

So, let's all take a page from the book of Betsey.  Remember ladies, you are strong, you are powerful, you are capable of making your own decisions.  If you want to wear a crazy fashion trend or a not-so-crazy fashion trend, go for it.  Maybe you'll look great, maybe you'll look stupid, maybe people will talk about you behind your back or maybe you'll get compliments.  Regardless of the outcome, you'll likely live through the experience.  So, why all the angst?