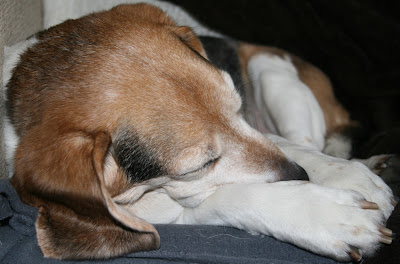 Recently, I was asked for a status report on Simon, so read on for all the latest info.

Simon remains taking 70 mg of Vetoryl (trilostane) twice a day and it is keeping the excessive drinking and urinating at an acceptable level.  He's still drinking about 2.5 times more water per day than he was pre-Cushing's Disease, but it's a far cry from a few months back when he was slurping up 5 times the normal amount.

He has only really had two obstacles.  I have mentioned in past posts that the medication he is on makes his back legs very weak.  Unfortunately, his legs still shake a fair amount when he's walking or standing in a certain way and occasionally he will stumble or fall when he tries to turn around really quickly.  Over the last month, we have been working on building up his hind legs again and we're making progress.

Also, the Vetoryl really upsets his stomach.  Some days his stomach is grinding away so loudly that it's quite disconcerting.  For the most part, I have been able to make him more comfortable by giving half a Pepcid with his meds.

On the plus side, he has been more loving lately.  For the last several months he didn't want to be cuddled and he was pretty crotchety (I had chalked it up to getting older, but in my research, I learned that mood changes are common in a Cushing's dog).  Lately though, he has been calmer and much more snuggly.  Needless to say, this makes me very happy to see his normal personality reemerging.


*The title refers to another of Simon's nicknames.  His most oft used nickname is "The Bean" and I explained its origin here.  But, just because I like to make things as confusing as possible, he has several others, including "Mon Bones."  I don't really know how the name evolved nor do I remember all the reasons behind rest of his monikers:  Beastermeyer, Scoob, Monkey Joe, Hounden, Putchnik, Sniffy Snifferton, Nerdlette, Spazzwick, Bazeldean, Butthound, Loopy Lou, Beastum, Buzzard, Bone Dog, Yowler Monkey, Pizza Hound, Butch, Mr. Lovely.  You'd think with all those names that Simon wouldn't know what the heck was going on, but he responds to every single one of them.  Well, at least when he feels like it.  :)
Posted by Shannon at 4/30/2010 04:43:00 pm

Thanks for the update! I'm glad that he's doing better and snuggling more.

I'm so glad he's still doing better! Butthound. hehe. I've known a few of those in my time. ;)

Thanks for this update! I had been wondering about Simon. Glad to hear he seems to be making progress and his personality is coming back.

Thanks so much for the update. Love the nickname list - amazing how many they have nd respond to. g

Thanks for the update. It's so hard to see a dog in discomfort and I know what you mean about the not cuddling part. Our almost 18 year old dog doesn't want to cuddle any more and it's sad.

Nothing better than a snuggly dog ~ so nice to hear he is doing better.

So great to hear he is doing well!

Glad to hear that Simon is doing well. Do you sing him songs? Molly has special songs that I sing to her on certain days. For example, when we go to the gym. My trainer brings her dog, Herbi, so on those days I sing Molly a song about chicken, car and Herbi. First of all she has chicken, then she goes im the car and then she sees Herbi. She knows what all those words mean. Oh and I do know how pathetic I sound!

So glad to hear Simon is holding his own and getting back to his old personality. It is amazing how you can call them by all sorts of names that don't even sound like their own names but they know you are talking to them.

Your Simon is a lucky pup. And cute too!

And all this time I thought I was the only goof ball that sang to their dog. I used to sing the Teapot song to Toffee, he pretended not to like it but I know better. BTW Shannon I'm so glad Simon is doing better. Continued well wishes coming your way.
Wendy

Thank you so much for the update on Simon. Glad to her he's holding his own. Ahh, the names we give our fur babies. No matter what, they always know we're talking to them...or about them.

I'm glad he is still doing well. That picture of him is just precious.

Glad to read that things are better. We also have a beagle with many nicknames. My daughter, while coming in from a walk with the dog, asked why we didn't name her Sniffy. I love the pictures you post of Simon and that one ear sticking up.

I'm glad to hear that he's doing better... He is lucky to have such a caring family!