Straight to the pretties: 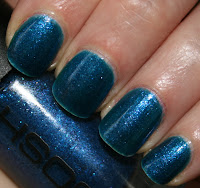 Blue Monday is a royal blue base, packed with lovely blue micro glitter.  It is super sparkly and reminds me of deep blue water.  This polish looks very much like a glass flecked polish (like the Summer 2009 collection from China Glaze last year), which I think is fabulous (I love me some glass flecked polishes).

Blue Monday applied nicely due to a good formula.  It only required two coats to cover visible nail line, but I chose to do three coats to build up a greater depth of colour.  It wore well for the day I had it on - only minor tip wear and no chipping.


BB Couture - Blind Love
- purchased at overallbeauty.com for $9.00 US

Blind Love is an odd duck.  It's kind of gold and it's kind of olive and it's kind of silver, depending on the lighting and depending on what you're wearing with it.  Regardless of what colour it is, one thing is for sure, it is stunning.  I received more compliments, from a wider range of people, than I have received on any other polish I have ever worn.  It seems everyone, young and old alike, loves Blind Love.

Blind Love applied wonderfully due to the excellent consistency and formula, as is the norm with almost every BB Couture polish I have used.  If I had to complain about something, I would suggest that the brushes could be a smidgen wider to facilitate application.  Two coats were needed for complete opacity.  The wear was great - only minor tip wear after two days.  This one is a winner for sure.

Fairy Teal is a medium dusty teal creme that is quite pretty on the nail.  I fell in love with this polish the minute I put it on. Lately anything teal makes me swoon, so maybe it's just the crush talking.

Fairy Teal applied nicely.  It was bit on the thick side (but not so thick that it was annoying) due to what I believe is a large amount of powdered pigment in the formula.  Because of the super pigmentation, I really only needed one coat for completely acceptable coverage, but I chose to use two coats to ensure total opacity.  I have mentioned in the past that the new Sally Hansen brush may be a turn off to some (because it is very wide and flat), but I love it.

ETA: SH Complete Salon Manicure is supposed to be an all-in-one polish, so the use of base coat and top coat is not necessary.  I have chosen to ignore this though.  I still use a base coat to reduce the amount of nail staining and a quick dry top coat to speed up the drying process.

Grape Idea is not polish that I would typically gravitate toward at the store, but it was on sale a while back, so I decided to give it a shot.  I'm glad I did.  The shimmery raspberry (it looks nothing like what I associate with a grape, but I'm not going to judge) is certainly not a cutting edge colour, but it is a nice polish for the conservative woman in the crowd.

Grape Idea applied nicely, due to the lovely formula and the excellent wide brush (it is similar in  width to the OPI Pro Wide brush).  Unfortunately, I needed four coats to build up enough colour to obscure visible nail line, so it took a while for this manicure to dry.  Wear was good - only tip wear after one day. 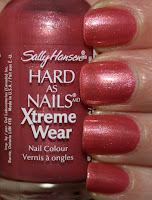 Almond Crunch is a shimmery pink.  As with Grape Idea (above), I never would have bought this polish if it hadn't been so cheap.  Especially since it's so pink.  That said, Almond Crunch is not totally unappealing.  I put it firmly into the pleasantly boring category. (but, hey, to each her own).

Almond Crunch applied nicely, due to the lovely formula and the fabulous wide brush.  Unfortunately, I needed three coats to build up enough colour to obscure visible nail line and even then I had a bit of show through.  Wear was good - only tip wear after one day.
Posted by Shannon at 4/26/2010 03:30:00 pm

Some interesting colours. The teal is lovely, but Blind Love is very me. I usually prefer cremes like the teal, but if I'm having a frosted I like them like Blind Love.

Oh, I love that silver one!

With the Sally Hansen 5 in 1 Salon Manicure, do you skip all your steps and just apply the polish as is?

The Blind Love is great! I have a cheapo version (several years old) of a similar gold yet silver yet olive polish and it's one of my favorites.

We all love to see your pretty nail colors, your beautiful flowers and the gorgeous things you sew, but it's been a while since we've had an update on your sweet puppy. How about it? How is Simon?

The fairy teal colour is lovely!
I wish I had your nails!! (And your collection of polish!!!)

I just tried Fairy Teal last week. I loved the color and the brush is awesome. I did have a little trouble getting it off, though. It really wanted to stain my cuticles and the surrounding skin. I still love it, though, and I'll wear it again!

My husband is going to KILL me when he comes home from deployment...I've started doing my nails three times in a weekend...eeeee!