Straight to the pretties:

Creative Nail Design - Hyde in the Dark
- purchased at Trade Secrets for $5.37 CDN 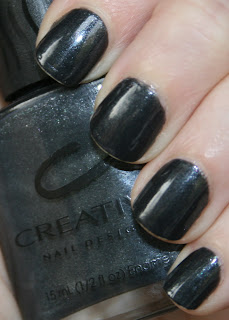 I found this polish in a bargain bin at Trade Secrets several months ago. When I got it home, I tossed it into my "untrieds" storage drawer and kept passing it over in favour of other polishes. I wish I had used it sooner. Hyde in the Dark is a dark charcoal grey base packed with silver shimmer. On the nail it looks super cool - like asphalt or a sparkly chalk board. One of my male students even complimented me on this polish, which never happens. Teenage boys don't tend to notice stuff like nail polish, so you know this polish is pretty nifty.

Hyde in the Dark applied nicely and covered well. I used two coats to get bottle colour, although I could have gotten away with just one coat if I had been more careful. My only complaint is that the polish is really smelly - more so than most other polishes that I own.

It wore well - only light tip wear after two days. 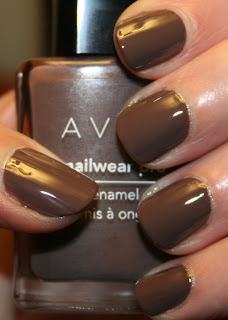 Last week, I professed my love for OPI's You Don't Know Jacques, while at the same time lamenting the price tag on a bottle of OPI polish in Canada. Well, I wish I had known about Nocturnal when I bought YDKJ. Nocturnal is a dead-on dupe of YDKJ, for a third of the price (if you get this Avon polish on sale like I did). Not to mention that the Avon formula is exceptional. I would say it is even better than YDKJ - it flows on beautifully and covers opaquely in two coats. It is an excellent value. 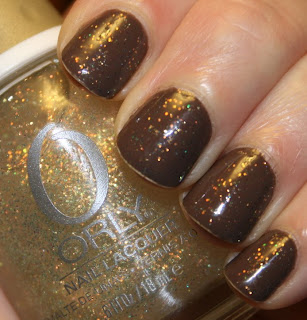 Since I had just worn a greyed-out taupe last week, I decided to top Nocturnal with Shining Star. This Orly polish consists of a colourless based chock full of prismatic glitter that sparkles gold and green, depending on the angle from which it is viewed. Unfortunately Shining Star is really rather gloppy and thick, making it a bit difficult to apply. I imagine this can easily be remedied with a bit of polish thinner though.

I wore the two polishes for two days, over which time I noticed only minor tip wear. 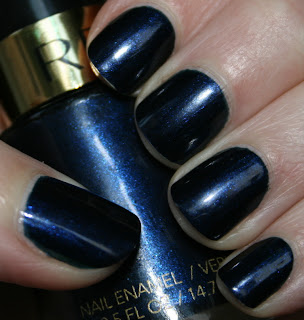 Midnight Affair is an exceptionally beautiful dark navy (with minor purple undertones). It is must-have for the lover of vampy colours and/or blues. It reminds me of car paint with a slight metallic sheen.

Midnight Affair applied well, due to the nice formula and consistency. It covered opaquely in two coats. After two days, I had a decent amount of tip wear, but no chipping. All in all a great polish. 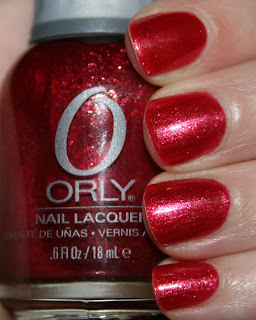 In the bottle Garnet Truth looks like a rich ruby (garnet?) red with silvery shimmer. On the nail however, it appears more hot pinkish. Although, I would rather have the red than the pink, Garnet Truth is still a very pretty colour. It is super shiny and festive.

As with all my Orly polishes, Garnet Truth applied beautifully - smoothly and without streakiness. However, I did need three coats to build up the sheer colour and even then the polish is not completely opaque.

I just bought the same Revlon Midnight Affair to go with a dress I've made, so it's nice to see it on someone's fingers. I'm looking forward to wearing it now.

Lots of lovelies this week! The blue is just like an OPI we bought to match my daughter's Christmas outfit. The color is called Opening Night, bought at Sephora.