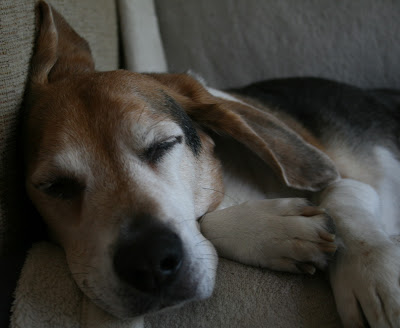 Several readers have asked for a Simon update and I certainly don't want to disappoint anyone.  It has nothing to do with the fact that I think Simon is the sweetest little man ever put on Earth and that I can't help but blather on about him, given any opportunity.

So, let's see - I believe last time I posted about the Bean (Simon's nickname), he was to begin taking 70 mg of Vetoryl (trilostane) twice a day.  Since then, his ACTH stimulation tests have come back normal and his clinical signs have leveled off.  He now drinks about 2.0 L of water per day.  It is higher than the 0.7 L he was drinking last year at this time, but it's considerably better than the 3.5 L he was drinking four months ago.  At least now he sleeps through the night, instead of waking us to go outside five to eight times a night (can you say sleep deprivation?) as he was a few months back. Also, he can hold his urine longer during the day, so the in-house accidents have stopped.

The only down side is that the meds make his back legs very weak.  We used to go for almost daily hour long walks at a fast pace.  These days, Simon is tuckered out after 30 minutes at a fairly slow speed.  I'm hoping to build back up his rear leg muscles now that the warmer weather is coming back.

Thanks for the update! I was wondering how he was doing too. Glad he is getting better!

So glad he's better. Hope his back legs are able to get stronger. I'm sure they will with such a dedicated mommy.

Glad to hear that Simon is doing better.

I'm so glad to hear this good news about your beautiful Simon.

Wonderful!!I'm so glad he is doing well.

Ahhh, the sweet little thing. Glad to hear he's doing better.
Thanks for the update!

Thanks for the update. I'm glad to hear that he is doing better. Hopefully, he'll just need to build his rear leg strength for longer walks.

Thanks for letting us know! I'm glad that things are improving for your sweet little guy.

OMG I just want to squoosh that face! He's so cute! Thanks for the update and I'm glad to hear your Bean is continuing to improve.

Tell Simon he's not alone - I should get out and strengthen my rear muscles too. ;-)

Yay! I love a Simon update. I was going to email and ask this weekend!

I laughed at the above comment, you tell Simon my rear is quite out of shape after 30 min too! Maybe we should ALL do a Simonathon! :D

I'm so happy to hear Simon is doing better!

So nice to hear Simon is doing better :)

Glad he has improved! He's so adorable!

Good news! Glad to hear he's feeling better and strengthening those muscles - I should go work on mine now LOL

I'm so happy to hear he is doing better and I hope he continues down this road. :)

Thrilled to hear that your Bean is doing better. I often think of him when I look at my own little monster