In a comment to a recent LL post, Barbara said..."I love these posts and read every word. One question though, for busy weeks what polish is your favourite for wear? I get discourage when I have one that starts to go at the tips before the day is out."

If I know I won't be able to change my polish for longer than a couple of days, I tend to stick with very neutral, very light colours. Light colours, even when they do wear or chip, are less likely to draw unwanted attention than darker colours. Two suggestions are New York Color in a Minute Bryant Park or Sally Hansen Hard as Nails Xtreme Wear Sand Lots.

Now, in terms of excellent wear, regardless of colour, I gravitate toward BB Couture and Orly. These two brands tend to give me less tip wear and fewer chips long term than other brands. However, be mindful that every person's body chemistry is different and what works for one person may not always work for another.

My final suggestion is to invest in a good base coat and top coat. My manicures right now consist of one coat of Orly Calcium Shield Nail Builder, one coat of Orly Bonder Base Coat, one to three coats of nail polish as needed and one coat of Sally Hansen Insta Dri Top Coat. There are also nail polish refresher top coats (this link takes you to one of the many possibilities on the market) - you apply a coat every day or two to ward off wear. I have never used this type of product because I change my polish so often. Hopefully, these tips will extend the longevity of your manicures!


After reading the last LL post, deb said.."You recently answered how you get the polish on so smoothly. But I've been dying to ask, how do you keep your cuticles so nice?! You should be a fingernail model! Your cuticles look perfect. Mine are dried and frayed, embarrassing 365 & 24/7. Super strength lotions don't last the day. The best cuticle removers and gentle treatments done frequently actually makes them worse. I work on a computer most of the day & don't do rough stuff with my hands other than handling some paper and some fabric. I don't polish fingernails so no chemicals there. Why must they look so dry. What do you recommend? Or are some of us resigned to ugly cuticles forever??"

In the past, I used cuticle remover once a week, but I have since abandoned that practice (mainly because I forget to use it). I now only use it maybe once every two months. The only thing I do on a consistent basis is massage Mango Mend into my hands (with an emphasis on the cuticle area) on an almost nightly basis. When I think of it at work (which isn't often), I slap on some hand cream. My major issue isn't the cuticle area, but rather the hard skin that forms on either side of the tips of my nail. For this, I have a pumice file (similar to this) that I use lightly to remove the hard skin, after applying Mango Mend.

That's pretty much it. The worst that hits my hands is chalk and some lab chemicals (both of which are washed off immediately after my lessons). However, I don't do much heavy labour with my hands - no hot water, no harsh detergents, no handling of rough materials. If I did have to deal with these issues on a regular basis, I would certainly use gloves without fail.

Another thing that I do occasionally is slop up my hands with a heavy moisturizer and put gloves on, then go to bed (or take Simon for a long walk in the winter). After this, my hands are super soft. This tip is an oldie, but a goodie!


Now, on to the pretties:

BB Couture - Opposites Attract
- purchased at overallbeauty.com for $9.00 US 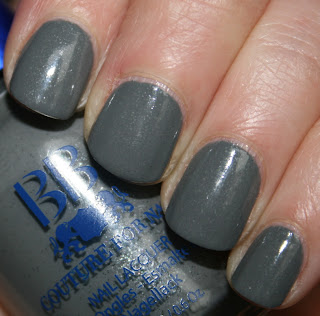 When I first spotted Opposites Attract, I knew I must posses it. Between the medium grey base and the silver and black micro glitter, it was too unique to pass up. It is an excellent neutral shade that satisfies my desire for darker nail polish without going all the way to black.

Opposites Attract was bit difficult to apply due to the consistency. The polish was a bit thick and during application it would "chunk up" on the nail, causing drag marks and bald spots during the first coat. The second coat, however, covered up any issues and provided nice opaque coverage. It wore well - only minor tip wear after two days. 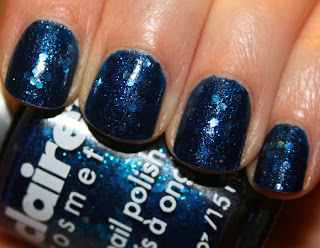 Chunky Blue called out to me from the display rack at Claire's. "Buy me, I'm insanely gaudy." So, I bought it because it was crazy and tacky and wonderful, what with the medium royal blue base and the large hexagonal silver glitter.

Unfortunately the application sucked. The first coat was streaky and thick and gloppy and weird. The second coat was only slightly better. The third coat, thankfully, disguised these problems and I ended up with a fairly respectable manicure. I'm not surprised by the crap quality considering this polish is marketed to tweens. However, this polish is not cheap at $5.75 CDN per bottle (I snagged mine at a buy one, get one half price sale, so it was a tad less expensive than usual), so I expected a better polish experience. The wear on Chunky Blue was mediocre as well - substantial tip wear (although no chipping) after two days. In the future, Claire's brand nail polish will only come home with me if it's really unique and it's on sale. 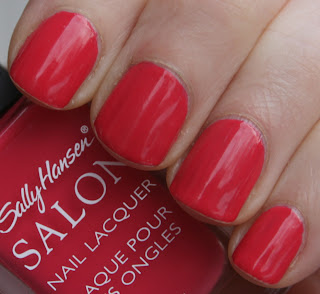 In my never ending quest for a pink that doesn't make me puke, I am learning a few things. First, I don't think I'm capable of loving pink, regardless of the shade. Second, I can't get past the belief that light pink is for sissies and/or women far more in touch with their feminine side than I. Third, the darker the pink, the better.

Azalea, part of the Tracy Reese for Sally Hansen collection of Spring 2009, is a darkened hot pink creme. And, although it still reminds of something a PTA mom would wear and thus it falls firmly into the safe category, I find it reasonably appealing. I must admit I did get several compliments while wearing this polish (ironically, mainly from PTA moms). I can see this polish being a pedi when the weather warms up.

Azalea was bit lacking in application. The polish was slightly viscous and streaky, requiring three coats to cover bald spots and even out thick spots. I had a fair amount of tip wear after two days.
Posted by Shannon at 1/25/2010 06:00:00 am

I can totally relate to the way you feel about pink polish. I also found a hot pink I like recently, Big Spender by Essie.

I just found your blog and love it. You share my two passions: sewing and nail polish!

love the polish swatches! About cuticles, warm olive oil for about 30 seconds in the microwave and soak your nails and cuticles in them for 5 minutes. It works miracles

Great tips. I need to take better care of my hands!

I have a question--what tip do you have for drying the polish? With so many coats of polish, it must take awhile. Besides patience or a fast dry top coat, is there any other technique?

I just found your site and read about you dog. Did you and your vet consider diabites? The drinking and peeing could signal that. A friend of mine had the same issue and they were able to control it -- however, their dog did lose his eyesight. Just wanted to "put it out there" for you :)

I like the Azalea colour. I have used Diamond Glaze top coat in the past (forget the brand) which gives pretty good protection.

Do you have a tip for getting nail polish to dry and set quickly? I feel like I have to choose between sewing and doing my nails at times because of the length of time it takes to dry.

Mm.. compliments from PTA moms.. I find they're a subtle form of social pressure - silence when they see your usual clothes/polish, and extravagant compliments where you wear something in the direction they can relate to. I'd probably ditch the Azalea if I were you :-).
Why do you think you -have- to like pink anyway? It's been pushed as the sissy color so much that it's impossible (for us) to shed that image. Unless you're trying to mollify the PTA moms for some reason, life's too short not to wear grey, or blue, or..

That Mango Mend is amazing! Thanks for the tip.

New to the blog - inspired to start checking out the patterns in thrift stores!

Deb - Re dry cuticles as a secretary - handling paper is VERY drying to the hands. I use the cuticle creams that come in a small jar - hoof & nail or revlon are both good ones - I find they moisturize my cuticles without softening the fingertips so much I get papercuts. The key is to use it at least once a day - if you're lazing around the house for a day, use it as often as you think about it.

Michelle - bubbles in polish - I read somewhere that it can be due to breezes, so try not to wave your hands or blow on them while the polish dries. Also, don't shake the bottle too vigorously - put it between your hands & rub back & forth to keep from shaking in air bubbles. But some polishes just seem to bubble no matter what.
Ellen in CA

Michelle- I've heard the same thing as Ellen in CA- shaking the bottle too vigorously brings on bubbles; but a couple of things I've noticed on my own are: that if I make the coat of polish too thick on my nail, I get bubbles. (And peeling. And tip wear! ) Also, if the polish is older (read: thicker), I get more bubbles. So, to combat the dreaded bubbles, I now roll the bottle between my hands instead of shaking it; if the polish is too thick, I add the appropriate thinner for the polish formulation (old school vs 3 free); and lastly, even though I get antsy, I do several THIN coats of polish instead of fewer thick ones...

That is the contents of my brain on the bubble issue. I hope it helps!

Curiously though, I now want a glass of Champagne...

Shannon, I agree with you on the pink issue- but just for fun, I though I'd mention Rescue Beauty Lounge "Pepto Pink" to keep you from puking-lol ; )

Actually, it is rather nauseating; but sometimes I'm just in the mood to "ill".

(Usually, I end up with more of a magenta- check out Revlon #917- Plum Seduction- that's kinda close to pink...)

Thanks SO MUCH for the Mango Mend tip. I will order some. I had been finding that Callex worked better than ANYTHING at keeping cuticles soft all day, but then my fingers started to hurt. Apparently, it shouldn't be used as a leave-on moisturizer, it's an exfoliating treatment for feet. I knew that, but thought I'd found another creative use for it. Mango Mend is on its way to my mailbox!

Oh and Eucerin works well too.

Re: pink, not a fan of pink no matter how much people try to say it's a good color for women. But I love seeing men in pink! Go figure.