Let's start with a question I get asked quite often. In response to an earlier LL post, Heather said..."How do you get the polish on so neatly around your cuticles?"

The neatness with which I apply my polish is due to several factors:

**Patience - clean polish application is the result of "slow and steady wins the race." Rushing always results in less than stellar results for me, so I go slowly. I have also been known to hold my breath during each stroke of polish, so my breathing doesn't shake my hand.

**Practice - as with most things in life, "practice makes perfect." I paint my nails so often, I can almost do it on auto-pilot now.

**The Gap - Some people prefer the look of polish that extends all the way to the cuticle. I, on the other hand, prefer to leave a crescent-shaped gap around the perimeter of my cuticle. That way there is no unsightly pooling of polish at the cuticle and it eliminates the need to clean polish off of my skin.

**Insane Fine Motor Skills - I can't bounce a basketball and walk at the same time (well, I can, but there will be bruising), because that requires good gross motor skills. I can however give that dude who paints on grains of rice a run for his money because I possess exceptional fine motor skills. I guess that why I enjoy hand sewing so much too.


Now, on to the pretties: 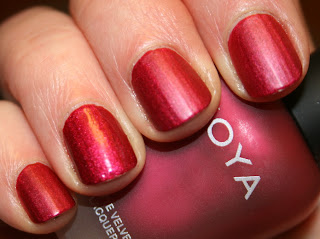 Posh, a stunning burgundy matte polish, is one of the offerings in Zoya's Fall 2009 limited edition Matte Velvet Collection. Posh is simply gorgeous (and this is coming from someone that is usully rather meh about reds). It reminds me of a red velvet chair that my grandmother had in her formal living room - deep and rich and sumptuous.

Posh applied nicely, although it does take some patience to ensure that each coat is evened out in terms of consistency. Too thick here or too thin there will certainly be visible (in an unflattering way) on the nail. Also, be aware that matte polishes will emphasize nail ridges, at least in my experience. Posh required two coats for opacity and they both dried quite quickly (as matte polishes tend to do). After two days, I had fairly substantially tip wear, but that is to be expected with a polish that must forgo a top coat (although I did use a top coat on my ring finger for comparison - see the photo). 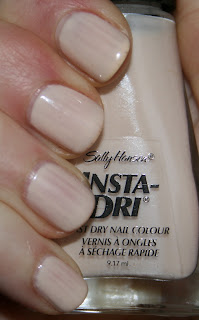 Although I am a huge fan of colour, I couldn't resist giving the Spring 2010 "mannequin hands" trend a go. Basically, the trend requires that the wearer find a polish shade that most closely resembles her skin tone, thus creating a long interupted line from wrist to finger tip. So, I searched my stash for a polish close to my skin tone and came up with Beige Blast. In the past, I have professed my admiration for the SHID polishes. Unfortunately, I cannot continue the love fest with Beige Blast.

Beige Blast is a milky beige polish that goes on sheer (I needed three coats to get a build up of colour and even then, I could have used another coat or two for opacity and steak elimination). The consistency was rather thin and sloppy, in contrast to the typically thickish viscosity of other Insta Dri polishes that I have used. After two days I had substantial tip wear. This was not a winner. 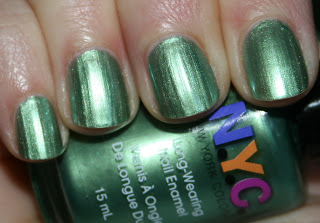 Big Money is a frosty (almost metallic) light green polish that looks much better int he bottle than it does on my nails. Although, I am a self-professed lover of green, Big Money is not a keeper for me. This particular shade of green makes me look like I'm channeling a witch or an ogre (Shrek anyone?) and it ain't a good look.

That doesn't mean that the polish formula is necessarily bad however. Although I did require three coats to eleiminate much streakiness (and could have used another coat to totally eliminate bald spots, but four coats is not something I'm willing to commit to for a bleh coloured polish), the coats applied wonderfully. I had minor amounts of tip wear after two days. 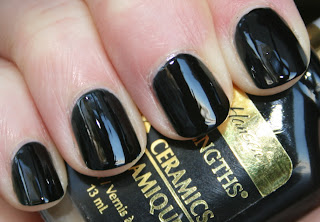 Although Raven appears to be a very, very dark navy in the bottle, on the nail it is simply black. Granted a very glossy black, but black nonetheless. So, it really isn't anything all that special. In an attempt to sexy up my plain black manicure, I layered #53 on top. #53 is a clear base positively overloaded with bright blue flakies that flash hot pink and green depending on the lighting. All I can say is "WOW!" 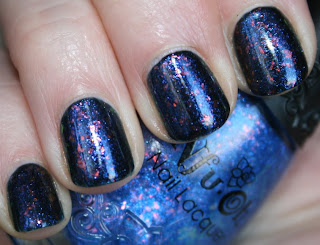 Both polishes required two coats for optimum results. The first coat of Raven was a bit worrying as it went on super streaky and uneven; however, the second coat fixed that right up and opacity was achieved. #53 would have been fine with a single coat, but the second layer added that extra bit of iridescent oomph. I am still wearing this manicure as you read this review, so I can't comment on the extended wear, but it looks great, with only minor tip wear, after one and a half days.
Posted by Shannon at 1/11/2010 06:00:00 am

I really like the look of Posh on your skin tone. Matte polish is unusual. Very pretty.

Your nails look fabulous with just the SH Raven color on them as well!
Holding your breath during each stroke of polish may not be such a bad idea - less fumes to inhale!

I really like the red and I'm very fussy about reds. One thing I keep meaning to ask you: I was trained to wipe the tops of my bottles with cotton wool soaked in nail polish remover BEFORE I put the lid back on. This avoids any messy gluggy stuff at the top. A friend of mine keeps her nail polish in the fridge for some reason she can't remember. Do you have any special storage and bottle care regime?

I love these posts and read every word. One question though, for busy weeks what polish is your favourite for wear? I get discourage when I have one that starts to go at the tips before the day is out.