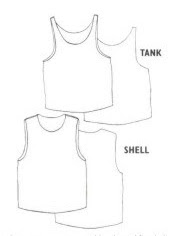 Comments: The pants are another version of the cropped Hepburns I have made in the past so not much to say about them. 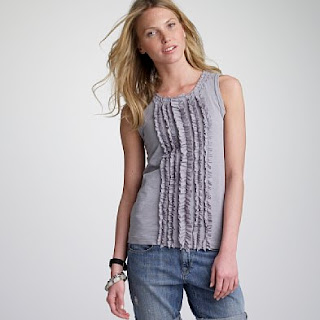 The top was inspired by a J.Crew offering (see photo to the right). I've noticed that ruffles seem to be all over this place for fall. I'm not really a fluffy, floaty ruffle kind of gal, so I've mostly ignored the trend. However, when I saw these small, understated ruffles, they struck a chord with me and I knew I had to make a similar top. I used a remnant of a soft knit fabric that I had lolling in my scrap bin for a practice run. I simply cut strips of the knit width-wise, sewed a basting stitch down the middle of each strip and pulled on the thread ends to gather the fabric. The gathered strips were pinned to the shell in the desired location and stitched down in place. Finally the basting threads were removed. My top is made entirely from knit fabric, whereas the inspiration top has woven ruffles on a knit tank. Either way, these tiny ruffles are super cute!

Conclusion: I have plans for some more ruffled up tops since I really like the way this wearable muslin version turned out.
Posted by Shannon at 8/28/2009 06:00:00 am

I love your top. I'm going to have to add the Hepburn slacks to my pattern collection.

Cute outfit. I have been meaning to try ruffles too!

I love your knockoff of the JCrew top, The whole outfit is so pretty!!

Shannon...you must be the best dressed teacher in your school!

I love this outfit...modern and chic!

Your fellow teachers are in for a treat seeing you in all your great new outfits next month (next week?!). Another great one here. The top looks very nice on you.

Love this top. Yours is nicer than the J-Crew model.

The Sewing and Knitting Loft said...

Cute outfit and I really like the top. Nice idea.

Really cute outfit but can I have your shoes!?! There have been some awesome pairs in the pictures and I have been checking them out but I really love these!!!

Interesting take on the ruffles and great interpretation. I'm not a ruffly person, either, but I think that these are not too overwhelming or in your face for the petite person.

Great outfit. The brown tones are great on you. Love those cropped pants.

Love the outfit and I will be borrowing your idea for the ruffles for the very same reason you did. Thank you.

Great way to use a trend that doesn't entirely suit you otherwise - I am not a ruffle/lace/frilly person either but this looks great - also like the idea of using a woven on a knit top.

That top is super cute and the ruffles are not too floaty, romantic. Nice way to use a current trend to suit yourself.
I also love your necklace.

Your top is cute. Like you I am not a ruffle type person but I am seeing more and more of this style. I like what you did with your top and I am going to give this try myself.

Shannon, love the top and there are just enough ruffles. Baby, you can work a pattern for those pants!!!!! And your timing is right on because the low hip riders are out , if I read the fashion mags correctly. I am really wistful about all of your back to school clothes. I retired from teaching last year and really get the blues when I see those yellow buses start to roll. The last couple of weeks in August were always sweatshop city for me. Now?? I suppose I should concentrate on some invloved projects. None the less, you are going to have outfits galore for the new year. Have a good year and savor every minute good , bad or otherwise. Remember, it's the most rewarding job in the world.

Hi! I found your website via Pattern Review, which referred to one of your posts on the SBA.

I'm just shocked by how much you sew. You must sew very quickly. I'd consider myself an advanced beginner, finally getting to the point where I can wear what I sew, lol.

I was wondering how often you sew during the school year. Do you do much more during the summers, since you have off? It's such a challenge to work and have one or more serious hobbies.

I love your top, even more than the J Crew version. Great inspiration and execution.

I can't believe how much you've been sewing! Another stunning outfit!