Orange You Glad You Asked? - Part 3 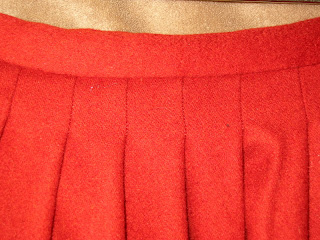 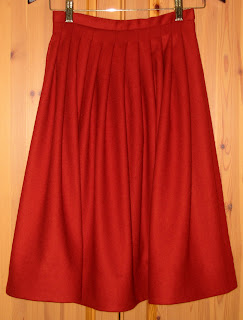 I finished the full skirt a while ago, but never got a chance to post about it. It went together easily - although all those pleats sure do require precise marking and measuring! You can see a section of the pleats in the photo to the right. I really like this skirt - it came together quite nicely. I had some concerns that that a full softly pleated skirt, made in wool, would be too bulky through the waist. However, the fabric was lightweight enough that my concerns were unfounded.

The only issue I had with this project was the hem. I choose to neither line nor underline the skirt, as I didn't want to add any unnecessary bulk around the waist. Although this was the right decision, it made the hemming a nightmare. The fabric is similar to a fulled wool flannel, with no distinct threads easily visible. This means that when the hem is turned up and hand sewn, it is difficult to pick up one or two threads as is the usual method. I actually hemmed this skirt several times - in the end, I hemmed around the entire circumference four (yes, four!) times and let me tell you, this is a full skirt.

The first hemming was done using the traditional method referred to above and the result was a disaster. The hem was clearly visible all way 'round the bottom - heck, it was a puckery mess! So, out came the first hem. I pondered the problem for a couple of days and finally settled on what I hoped would be a solution to this problem. 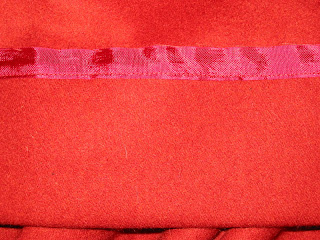 I decided to fuse interfacing to the hem, which was a bit nerve wracking as this fabric is a wool/nylon/cashmere blend. A hot iron had left irremovable marks on my earlier test pressings - but, with lots of moisture and a press cloth, it worked out fine. The hem is 3" deep, so I cut 5.5" wide strips of interfacing (a medium weight fusible weft interfacing) and fused it to the bottom of the hem. This way, the full 3" of hem turn up was fused plus 2.5" up the front of the skirt. My plan was to pick up one or two 'threads' of the interfacing when hemming, rather than the fashion fabric. However, I was still worried that the weight of the hem would pull on the interfacing and in turn, pull on the fashion fabric, causing puckers again. So, I hemmed three times - the first time at 1" from the bottom, then again at 2" from the bottom, both times using the interfacing as a buffer between the hem stitches and the wool. The third go around with hemming was at the 3" mark. Since the interfacing was 5.5" wide, it did not extend above the 3" hem line. This was intentional because I didn't want the interfacing visible inside the skirt when I was seated. This wouldn't normally be a problem with a slim skirt as it stays close to the body even when sitting, however, full skirts tend to drape over a chair and there was a possibility of the inside of the hem being noticeable. The hem at the 3" mark was now directly on the fashion fabric, which had been an issue prior to this. It was not a problem this time since the bulk of the hem was supported by the first two hemmings and all that was necessary was a light tacking up of the top of the hem. Although the hem is not invisible, as I prefer, it is pretty darn good, if I say so myself! 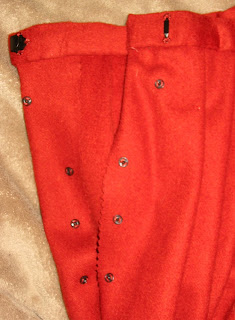 I did want to mention one interesting design feature. The side closure is ingeniously designed to blend in seamlessly with the rest of the pleats and there are no zippers or buttons holding the skirt together. The skirt is closed at the top with a hook and eye, as well as several strategically placed snaps. I love vintage patterns - there's always something 'new' and interesting to discover in them!


Last, but not least, thank you to everyone for the kind comments on my bound buttonhole tutorial. I did want to answer one question arising from it.

Marji asked, "It's all in the measuring and being really accurate. Do you count stitches too?"
I do not count stitches, although I suppose I really should just to be completely precise. However, I have found that I have a good eye for these things - I think it's from all my years as a scientist - I have good spatial abilities.
Posted by Shannon at 3/09/2008 11:41:00 pm

Shannon - when I was watching a Cynthia Guffy video on hand stitches, she actually suggests hand stitching a hem 3 time to more evenly distribute the weight. So - while it was a pain - you were right on the money! Can't wait to the worn photos. g

Great job - yes, hemming more than once does help to distribute the weight. Neat closure, and no interruption of pleats.

I had never heard of hemming this way. So something new in this for me. Thanks :)

I went through the same "nightmare" when hemming my red coat; You did a wonderful job, thank you for showing all the details (I love the way the closure is constructed; I've seen this technique in some vintage books before)

Shannon, Your vintage SWAP is coming along, even though you are wondering where your ambition went. I have a vintage Simplicity from 1964 with the same skirt closure. Interesting how some of the vintage pattterns have simple lines, few pieces, but "couture" techniques are used. In contrast, some newer patterns try to look more complex, but have "jiffy" features. As always, thanks for a great blog!
Marguerite

That is definitely the Cynthia Guffey hem treatment...and you made good use of it! I was wondering what happened to you and if you had fallen off the earth! :)

So will you use this week to sew? And if so, can we see something every day? I'm dying here not getting any Shannon SWAP news!

Gorgeous skirt and I love the vintage closure. As Gaylen said, can't wait for the worn pictures.

Wow, this is amazing! I am just starting to teach myself to sew and it's fabulous seeing the wonderful garments on blogs like this :D How long have you been sewing?