I have been making some progress with the jacket/top that is the match to the skirt previously made. Here is what has been completed to date.

Interfacing
I debated back and forth on what sort of structure would be built into my jacket/top. I wanted to keep the unstructured feel, but I have learned in the past that the choice to only interface the areas suggested in the pattern can be a mistake. When looking through an old issues of Threads (July 1999, Number 83), there was an article that caught my eye, "Armani Jackets: The Inside Story." Marcy Tilton takes the reader thorough the process used to interface a softly tailored Armani jacket. After reading the article, I decided to adapt this approach to my garment. When completed, the following areas will be interfaced: 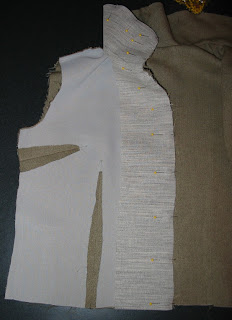 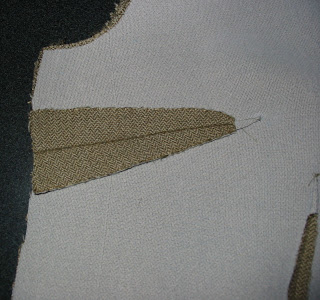 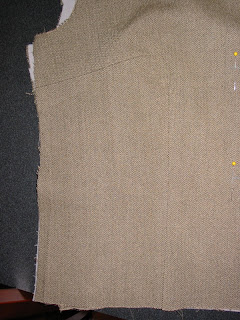 * The darts were sewn as per the pattern, then slit down the middle and pressed open (photo to left). This reduces the bulk of the dart and allows it to lie flatter, creating a more pleasing looking line on the outside (photo to right).
* In retrospect I should have made a small bust adjustment (SBA) on this pattern, but all was not lost. Since my fabric is wool, which is so malleable, I was able to steam out much of the unnecessary bust shaping when pressing the front darts.

Bound Buttonholes
* I have started marking for the bound buttonholes and will tackle them tomorrow.
Posted by Shannon at 1/28/2008 06:07:00 pm

Oh this so looks like the inside of my jacket right now...only mine is considerably longer!

Love when you are swapping, I get more posts more often!

Shannon, can you describe tie interfacing and its uses? Thanks, Elle